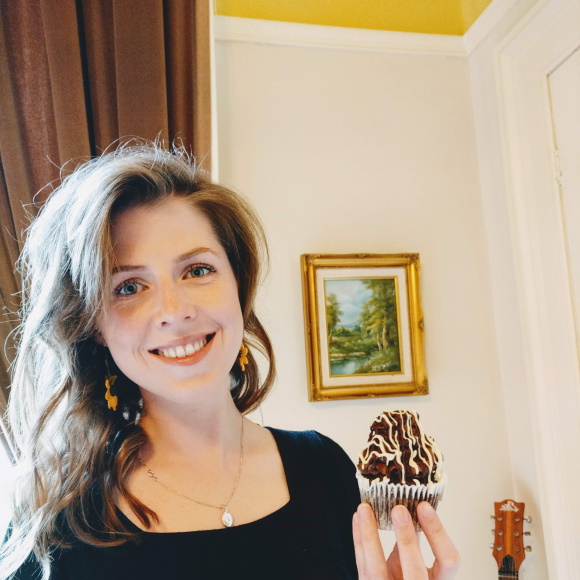 Here we feature Abbie Clayton who combines her skills as a designer with her love of baking that later on led her to launch her own bakery and cake shop Abbie’s Kitchen where she creates beautiful and delicious edible art for any occasion.

The idea for Abbie’s Kitchen began in February 2019. Prior to this, Abbie had completed a costume design and textiles print degree and then spent a year travelling around Australasia, Asia, and India. During her trip, she started exploring textiles and print further as she wanted to pursue a career in this sector. Abbie became inspired by a textile’s printer based in Singapore; Deborah McKellor, who had set up her own business, and soon decided that she too would do the same once she returned home to Manchester.

Months later, whilst enduring long coach journeys throughout India, Abbie began writing her business plan. She soon returned to Manchester, having exhausted all her funds, and landed herself a zero-hour contract in a local café. And even though she kept trying to sit at her desk in her spare time to draw and design, she instead found she had a constant desire to bake.

In fact, having not been in a kitchen for the past 12 months, Abbie became really inspired by being so. She realised she had all the necessary baking equipment and could afford cake ingredients – and so it went from there. Coupling her skills as a designer and her love of baking, she decided to start creating beautiful and edible art for any occasion.

She began by perfecting the basics in the kitchen. She had baked as a young child with her Mum and Gran but wanted to experiment and create her own set of recipes that were of a professional standard. She took lots of photographs of her creations for social media content and just a couple of months later in April, she went live with Abbie’s Kitchen and began taking her first orders.

Abbie continued to work in her café job alongside running Abbie’s Kitchen for the first year, before the covid-19 pandemic took hold. In March 2020, she was put on furlough – and this really gave her the time to put her all into her business.

Since then, things have really taken off. Abbie now offers a variety of savoury options and afternoon teas, as well as bespoke Celebration and Wedding cakes. She has a loyal customer base which keeps on growing as she continues to up her offerings. Best of all, she has stayed busy throughout the numerous lockdowns as the work is done from the comfort of her own kitchen. The pandemic has given Abbie the time to focus on her business, and to equally spend more time with her family – who have also been on hand to help out with flyering, delivering the orders, and even assisting in the kitchen!