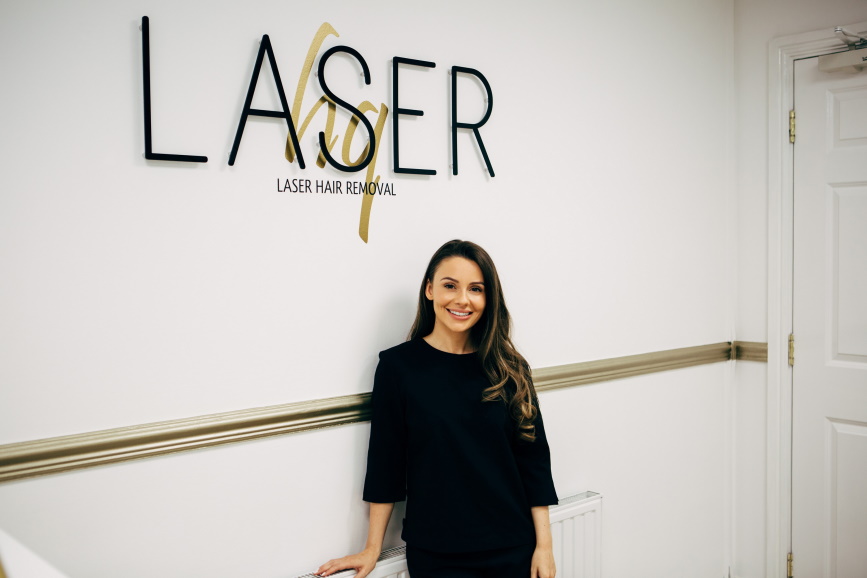 Helen Quayle launched the ‘Break The Taboo’ campaign in a bid to spread awareness of endometriosis and PCOS (polycystic ovary syndrome) which raised £1,745 for charity.

The ‘Break The Taboo’ campaign was launched under her brand LaserHQ which featured a series of billboards constructed near its clinics in Manchester, Liverpool and Leeds. The company also raised £1,745 for Endometriosis UK through donating £5 from every facial and body hair package purchased during the campaign.

Helen teamed up with specialists and hosted live sessions on her company’s social media platforms. The company created videos, blogs and leaflets with information about the condition, together with interviews and Q&As detailing clients’ stories about their experiences of excess hair – commonly experienced by women with PCOS.

She was inspired to create the campaign after being diagnosed with endometriosis POD and Adenomyosis last year.

Helen said: “I understand first-hand the impact endometriosis can have on someone’s life. It’s not often spoken about, but it’s a complex condition that affects an astonishing 1.5million women in the UK. As LaserHQ continues to grow, we are committed to continuing to talk about endometriosis and PCOS. We want to raise awareness, spark conversations and help more women overcome some of the challenges they’re facing – that’s why we launched our ‘Break The Taboo’ campaign.”

Helen added: “The campaign has been absolutely amazing, it was very emotional and inspiring. It’s been so touching, and it’s made me really proud of the team, they’ve been changing lives every day and making such an incredible impact. The clients who have come forward and talked about their experiences openly have been so brave and honest. We’ve just had such an incredible response from people, we’ve had floods of messages on Instagram. We’ve started conversations about it, which has been really important to us – it’s one of the reasons why we wanted to launch the campaign.”

The ‘Break The Taboo’ campaign billboards are based close to each clinic location, in Manchester, Liverpool and Leeds.

Helen, from Bury, is a former pupil of Bury Church of England High School. She has opened three laser hair removal clinics around the North West since launching the company in 2017, opening the LaserHQ headquarters at Hamilton House, on Bury New Road.

Helen, who struggled with dyslexia throughout school, employs a growing team, and the company’s most recent turnover reached £1million, with a fourth clinic set to open its doors by the end of the year.

She added: “We are incredibly proud to be supporting Endometriosis UK, which is the UK’s largest charity supporting those affected by endometriosis. The charity helps those diagnosed take back control by providing vital support services, reliable information and a supportive community.

“These women who come in to see us are a drop in the ocean. There are so many women battling with the symptoms and not knowing what is causing them. The women we’ve spoken to have such amazing stories. They’ve been getting emotional telling us about how the laser treatment has changed their lives. It’s made a huge difference to the hormonal issues or side effects they were previously suffering with.”

According to Endometriosis UK, diagnosis can be difficult and often delayed because it manifests itself in various ways and shares symptoms with other conditions. Recent research shows that there is now an average of eight years between women first seeing a doctor about their symptoms and receiving a firm diagnosis.

Helen said: “We want to do everything we can to spread awareness, and this campaign is just the start. One of our ultimate aims is to get better funding in the NHS. The word is slowly spreading, as MPs are now discussing research funding for endometriosis and PCOS in Parliament, which is a great step forward. We want to do as much as we can to ensure the word is spread. We need to speak about it, step up, and all pull together.”

A representative of Endometriosis UK said: “Endometriosis UK works to support those affected by endometriosis, raise awareness and to end the detrimental impact the disease can have on lives. We’re very grateful to supporters like LaserHQ for choosing to fundraise and help us progress this important work.”

For further information on LaserHQ or to learn more on Endometriosis visit the following websites: